Are this fields exposed for manipulation?

New Pipedrive customer here and also in charge of importing about 45.000 deals (about 30% active) to Pipedrive from our old software.

So far it’s going good but I do have a few questions.

A) Is it possible to manipulate the Lost At and Won At date fields when importing lost and closed deals?
The New deal and Update deal endpoints do not have this field and I ended up with a bunch of deals “lost today” and “won today” which does not reflect reality.
Support by chat by Helio pointed me to this endpoint which I don’t think is the case: https://developers.pipedrive.com/docs/api/v1/#!/DealFields/put_dealFields_id

B) Our old CRM also has a concept of Deal Status which would be somewhat equivalent to Deal Stage. We were able to reflect old deal statuses to our new pipe / stages structure just fine but I ended up with my deals parked on a stage since today (or 0 days). This is not ideal as I will not be able to kick off using the “Rotting deal” feature. I do have the date since the deal is parked on that stage and I would like to import that.
Support by chat told me that this is not available via API but I would like to confirm and also would like to know if its possible anyhow via support to do this change. I could supply support with a .csv with a simple structure (dealId|stageId|parked_since).

There isn’t a way to edit these fields via API, but you actually can do this through import, like: 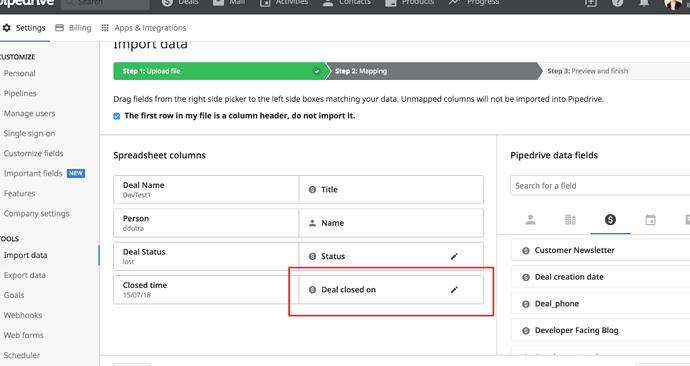 Thanks for the help.

The data I am importing is quite complex and my import jobs are tailored for the API.
Also, I am importing notes, activities of various types as well as files.

From what I could gather it is not possible to run a import job as an update (by providing deal Ids) so that feature is not ideal for me.

Do you have any input in regards of item B of my original question?

I totally missed point B, but support was correct on this. For deal stage time we’ve never had an option to manually edit it and the Days in Stage are always applied directly to how long it has actually been within Pipedrive.

For the importing though, you can update Deals via the import. You would just use the Deal ID in combination with the Fields you wish to update.

Hi there,
You may deliver that task (Pipedrive data import) to Data2CRM team. The techs can create custom fields and migrate records the way you need.
Just schedule a cal with Data2CRM experts and describe all requirements in details.
They have to help you