Webhooks notify changes that happen in the product. These changes are in the form of JSON data corresponding to a particular event. A list of events and the corresponding event object can be found in the Webhook Guide

In order to troubleshoot webhooks and also to understand the payload structure, you can use the following tools.

These tools let you preview the payload structure and the response headers easily. For instance, webhook.site lets you inspect incoming webhook requests by providing a temporary URL that you can use within Pipedrive webhook page.

Make sure you delete such temporary webhook urls once the testing is over.

The URL that is configured to receive the webhook notifications should respond with a 2xx status code to indicate that it has successfully received the data. Failing to do so will result in retries. The retry field in the payload is a useful field in that regard.

You can also make use of webhook_id, pipedrive_service_name, timestamp* & change_source fields in the payload’s meta block to uniquely identify a webhook notification. This information can also be used to avoid duplication on the receiver end (subject to retry logic behavior) 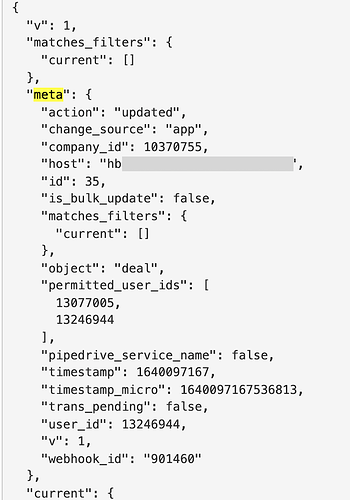