Bulk add contacts to a pipeline

We initially bulk imported all our customers into Pipedrive. They all (most, as it’s been in use for 3 weeks, so new customers have been added directly as deals) need to be added to a pipeline, the first stage. Is there anyway to bulk add them? We can add them individually by opening a contact, scrolling down and adding them to one of the pipelines there. Can’t see that field in the API though. Any suggestions as to the best way to do this? Really don’t want to manually edit 2000+ customers!

Hey @Jim_Tench
Welcome to the community

I would like to clarify one thing - are you referring to bulk moving deals to a specific pipeline stage?

If that’s the case, you could achieve that directly from the product itself. Just switch to the detail view for deals and bulk select them. Once the selection is complete, you would notice a sidebar like the one in the image below 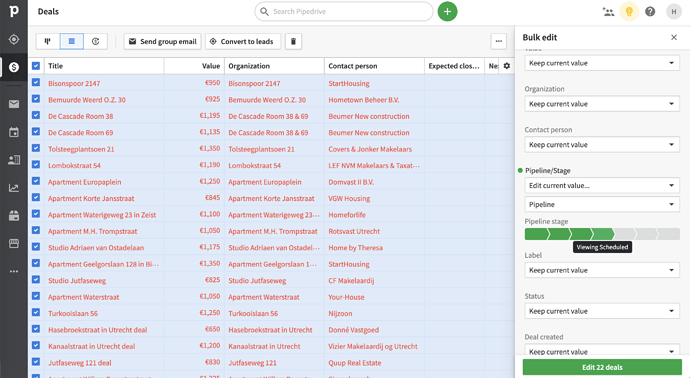 This enables to perform bulk modifications. You could also move them through the API but this could be an unnecessary complexity. Let me know if my understand is correct

Hi @Hem
No, the people are not in deals. I bulk loaded existing customers via the excel import, so have a load of contacts who are neither leads or deals. I’ve solved it now, just knocked up a little tool in dot net and leveraged the API. It worked fine.

Thank you for coming back to me though

Good to know @Jim_Tench. Thank you