While I am on the way to submit an app the the marketplace, I face 2 issues/questions.
My integration is developed on the third party software side, in the Pipedrive app, i just need to be able for each organisation using the app, to grab API credentials + setup the Callback URL.

Thanks for your help.

Hi @Norman_Pracht
Welcome to the community

Could you clarify a few things?

Can you share an example so that I can understand it better? (Does organization represent a Pipedrive company? What API credentials are we talking about - API token, Access Token, other?)

This app will have to be setuped by each organization that wants to use it. On the app, each org will have to grab its own API key + setup its own Callback URL (depending on their third party app they want to connect). My question is: this information (API key + Callback URL) are variables? When I try to submit to review the app, it looks like “locked” values. Each org. should have its own right?

From the perspective of Pipedrive, any user who wishes to use the app has to install it. The callback URL receives the credentials for that user in the account, which gives you access to the company’s data. You need to store these tokens based on the account details which gives you the ability to work with multiple accounts.

My question is: this information (API key + Callback URL) are variables? When I try to submit to review the app

Can you share the reason behind why different callback URLs are required for organizations?

When I try to send it to review, I have an error on callback URL. While this callback URL has a correct format. Nevertheless, the callback is a fake callback URL, because as explained in point 1, it will differ for each user (organisation).

Thanks a lot for your time and help.

Can you share an example so that I can understand it better? (Does organization represent a Pipedrive company? What API credentials are we talking about - API token, Access Token, other?)

Can you share the reason behind why different callback URLs are required for organizations?

Thanks for sharing the details

What you see in the picture is the set of credentials from the perspective of a Pipedrive App. Users who authorize this app will receive an access token and refresh token. You would need the access token to make API calls pertaining to that organization and user.

I talk about API credentials generated by the app people can create (or take) from marketplace. It is a couple: Public and private keys. This is for non developers and given from UI when you grab API credentials:

I might not fully understand your perspective here, so help me out.

Each Pipedrive customer that want to install this plugin will have to create its own API key right ? So I don’t understand why when i try to submit the App it already have credentials displayed.

For instance in the flow depicted below, there can be different resource owners (users / organizations) but there is only one client (the app and callback URL). Once you successfully store the account details and tokens, you can successfully handle multiple users simultaneously.

However, we already have example apps for you to try out without building the app yourself. I would recommend checking out GitHub - pipedrive/example-apps: Example apps for Pipedrive Integrations 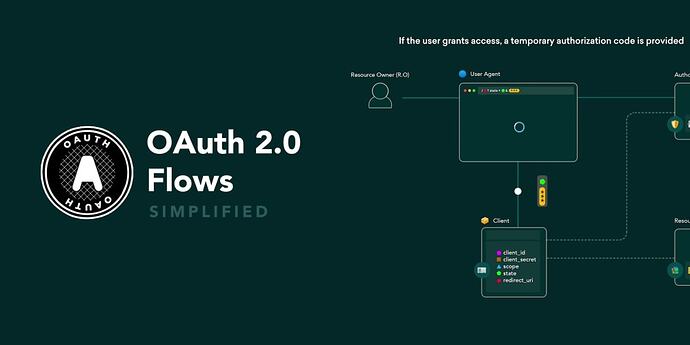 In this post, we will be covering all OAuth 2.0 flows using GIFs that are simple and easier to unders...

Let me know if it helps

I think we don’t understand each other, probably i explain myself wrongly.

My understanding is on installation:

My understanding is it should be:

Also my second question which is an issue. When i try to submit the app to review, i have error:

This topic was automatically closed after 10 days. New replies are no longer allowed.

Hi @Norman_Pracht
Thanks for being patient and for explaining this in detail. Can you confirm the following details?

Let’s say you have a public app that integrates Pipedrive with Mautic, there would be no need for the customer to copy any credentials (if its an OAuth app). All they need to do is to authorize

Customer A want to install app on Pipedrive marketplace, so he enable the app, and grab API credentials (they’ll use it in their mautic account) and setup mautic.a.com/pipedrive/callback in app.

Assuming that you want to build this bi-directional integration, this is how it looks on a high level. 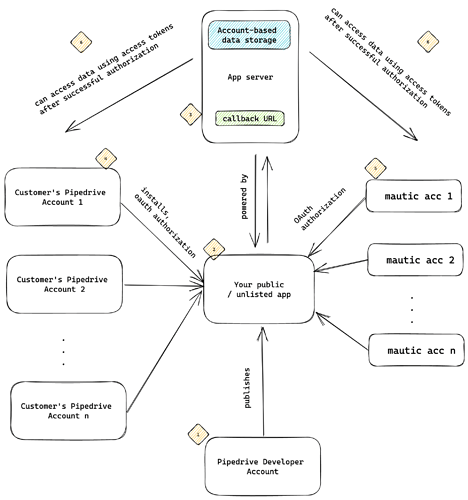 Do you already have an app server/middleware that handles this bi-directional integration? Sometimes it could be iPaaS tools like Zapier / Make. Can you help me with this info?

I sent you a PM.
Thanks a lot.