Get deals gives me millions of rows

I am working on an application for which I need to extract all deals from the Pipedrive API. In my Pipedrive CRM there are about 7000 deals. But when I try to get all deals it gives me millions of rows back.

It looks like it’s giving multiple rows for every deal, because I am getting a lot of different _Filename values for the same deals.

Can anyone help me with this issue?

Thanks in advance. Mike

Could you provide an example of how you are pulling Deals from Pipedrive API (without API token or Oauth access token)?

Thanks for your response. I am using this url:

You are using the correct endpoint GET /deals to get all your Pipedrive deals.

Each item in “data” is one deal. You can limit the number of deals per request by using limit query param (500 by default) 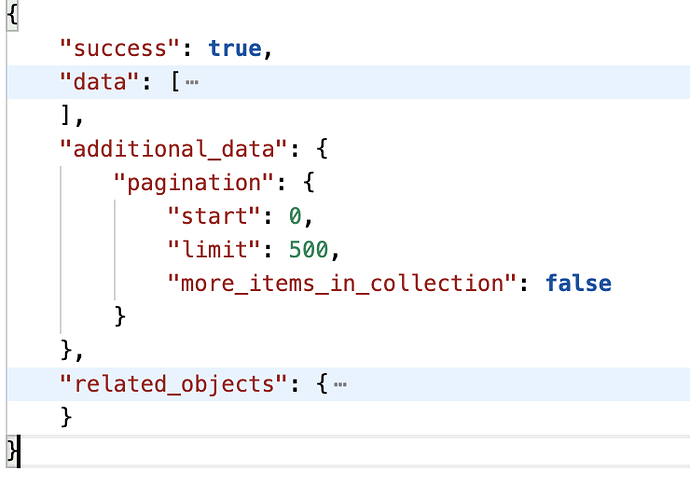 What’s the reason this GET /deals does not work for your case?

It looks like it’s not recognizing the last page. I am not totally sure, but I get a lot of duplicate rows back where only the column: __FileName is different. I attached an example of my SQL table where you can see the duplicates.

Each row should be a deal, so each deal ID should only occur once right?

GET /deals does not include __Filename field. I think it’s related to software you use to fetch deals from Pipedrive rather than API method itself.

Unfortunately, I can’t help you with that software. But I would suggest checking the logic of pulling deals from Pipedrive, meaning does it use pagination, does it use deal ID, these kinds of things.

Also, I double-checked the API again, it works as expected.

@mykhailo thanks for your response. I will try to figure it out. Have a good day!