I’m trying to update the Deal Creator ID. Currently, it seems to automatically set it to the user who created the authorization.

I am working in Integromat (which is similar to zapier). I’m building a custom API call and need to build the json call.

Does this body look correct? Can I even update the Creator ID, I don’t see it as an optional field in the endpoint documentation? 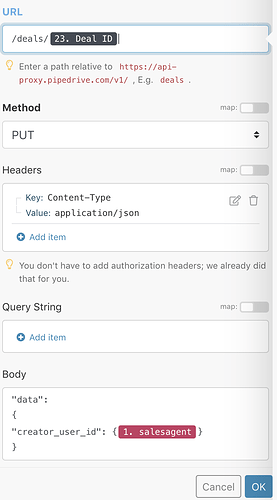 For this, you can’t update/change the Deal Creator ID, as it will always be associated to the API of the user that it was created by.

Instead, you can update/change who the Owner of a Deal is.

Thanks for the quick reply.

In our sales pipeline, we have an SDR that qualifies a lead and adds them to a stage “qualfied” using the api. We then have an Acct Manager, who takes ownership over the deal and works them through the rest of the pipeline.

In Pipedrive, we can use reports to see the deal creator and the deal owner at the win. I want to measure how many deals the creator added that eventually won, so i can make sure the SDR is only qualifying good leads that close.

If we can’t customize the creator to the sdr’s user id, what would be the best way to track the SDR’s performance in adding qualified leads to the pipeline while allowing the account managers to maintain ownership over the deal when it is won?