Q: Script to import from Pipedrive to google sheets for last 20 days

I have this script for importing from Pipedrive to Google sheets that works great. I would like it to only pull the matches from the last 20 days instead of from a specific date. I would also like to clear the rows each time and ass them in fresh rather than add them to the next empty row.

You can use start_date & end_date parameter to fetch last 20 days records and sheet.clear() to clear the contents of the sheet. Refer the below code. Hope this helps!

Sorry to pull up an old thread.

On a side note, which date does the API use when selecting start and end date?

I think i’ve fix it, by changing:

I tried your code but Im getting an error. I want to pull in all pipedrive deals to date including custom fields.

Can you help? See error below 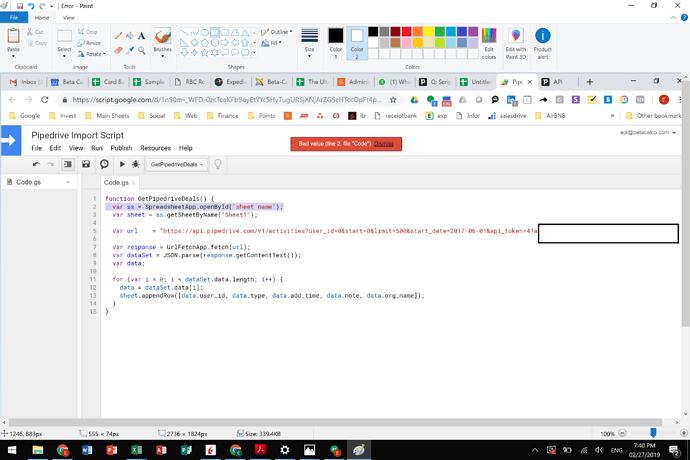 Hi. The id of the sheet is wrong. Take a look at Google Script’s documentation: https://developers.google.com/apps-script/reference/spreadsheet/spreadsheet-app#openById(String)

Hey Dani, So my code works perfectly fine when on a separate workbook with about three sheets and performs relatively quick, However Once on another workbook with many sheets, formulas, and conditional formatting, It performs quite slow and does not end up retrieving all 4400 deals.

I understand that this is a performance bottleneck due to the # of sheets, data size, formulas & referencing, but is there anyway I can overcome this without purchasing an upgrade to my G-suite account?
Currently it only pulls around 1000 rows.

The implementation of the pagination is wrong. You’re making way too many calls

There is a maximum number of items returned in any case (I believe it’s 500), so even if you pass limit=20000, that will not help.

Instead of doing a while(start<20001), you should look at the additional_data.pagination object to know if there are more items in the collection, and pass the start value to the next call accordingly.
Here you can find a more detailed explanation: https://pipedrive.readme.io/docs/core-api-concepts-pagination

I think that alone will improve your code and response time massively.

Hey Dani, Thanks for the quick response !

So for the additional data pagination object is it enough to set it up as follows :

then fetch it with :

I did that and for some reason Im still only getting 500 deals. Is there any way you could elaborate on the additional_data.pagination set up and initialization ?

Here’s an example that I wrote for you of how to correctly use the pagination with Google Apps Scripts.
I hope it helps.

and in deals you’ll have all of your deals ready to be used.

Thank you so much Dani!, so it works perfectly fine but for some reason its still very slow.

Best thing to do for me right now is to run it on the empty workbook(much quicker) and copy the sheet over to the populated workbook.

As the volume of my deals increase , At some point I will need to upgrade to the G-suite business plan - to increase my execution time to 30 min.

Thank you so much, I really appreciated your help on this.

I think that what you’re saying makes sense. It’s probably a good idea to run it on an empty workbook, first.
Glad it helped

thanks for your help. I have found another code that allows me to export a certain pipeline inkl. a filter into google sheet. But it doesn’t seem to work. Let me walk you through my steps.

In google sheets -> Tools -> Script Editor I have pasted the following code:

Unfortunately the code doesn’t work. -> My sheet remains empty. I would be very grateful if you could review the code.

I can see a couple of suspicious things that you might want to look into.

thanks a lot! I have managed to get the code working. I still have two questions, I hope you could answer.

I am very sorry for theese noob questions. I have tried to research myself -> unfortunately unsuccessfully.

Thank you and best wishes,
Vitali

I make this script, but I think my previous steps its wrong. Can you help me?

Hi @Leticia_Castro,
Can you give some more details?

I want extract more deals than limit of 500. Using the additional_data_pagination, The same thing of Daniel ask up there. But my query (image) don’t work, I make the steps, but I think my first part of query it’s wrong.

My problem:
I have a pipe around 20000 deals and my query returns just 500, because the limit. I saw in this post that is possible get more using the additional_data_pagination, but I dont’ know how make this.